A high profile divorce made headlines again yesterday, and I prayed for you. I prayed for you and for me, for anyone who is or will be married in this generation or the next. I prayed for the future of marriage in general because sometimes it seems like the gates of hell are set against it.

So I prayed for us, and then I wrote this blog.

A marathon is a long race. I’ve never run one. The closest I’ve come to a marathon is a 5k and it nearly killed me, but the two races share a common goal, just keep running, and finish the race. Even if it hurts, even if you are tired, just run.

When I ran my first 5k, my friend Janae ran the entire thing with me. You should know, she could have ran circles around me, but chose instead to serve as my own personal cheerleader. It was 19 degrees and there were many times I wanted to quit. But each time, there was Janae, smiling next to me encouraging me to just keep running. Her boundless energy drove me to insanity, but I knew she wasn’t going to let me quit. I venture to say had I tried to quit, Janae may have thrown me over her shoulder and carried me to the finish line. By the end of that race, I was running better than at the beginning, and all I really remember about it was how great it felt to finish, and how thankful I was Janae hadn’t let me give up.

During the race there were moments of joy and excitement, but it was at the finish line when I realized it had all been worth it, that I received my reward. 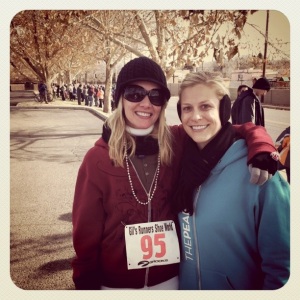 Marriage is like that. A race. For some a marathon, for others a 5k, only God knows the distance you’ll have to run but the principle remains the same.

The reward of marriage isn’t realized instantly, although there are so many moments of great joy, the reward comes when we realize it is worth it… all of it. We cheat our spouse and ourselves when we lose sight of the reward and drop out of the race.

Run past the hurdles. Few go into marriage blind, assuming there won’t be any trials, they assume instead they will be strong enough to jump over them… most are wrong. Truth is, we aren’t that strong. On our own, our flesh is the only strength we have, and like it or not, our flesh hates marriage.

Don’t be fooled, your flesh can’t love your spouse; it can only love the way your spouse makes you feel. Your flesh is dangerously narcissistic. Once that feeling of love is gone or challenged, a heart ruled by the flesh is ready to quit the race.

Greater is He that is in you, than he that is in the world. You have everything you need to push through life’s hurdles. Submit to the spirit in you and let Him fight for your marriage.

Submitting to the Spirit might mean lightening your load (Heb 12:1), getting rid of anything that threatens your race. Look, the message of this world is this, “if it doesn’t work you can always get divorced and there won’t be any consequences”, drop out, quit the race. This message weighs down any marriage! Each time a trial comes, you’ll find yourself wondering if this is your marriage not working or thinking it might be time to bail. Have you heard that message? It’s everywhere. If it’s in you, ask God to clean it out, and run.

Just keep running until you finish the race.

You don’t have to run alone.

There is a friend that sticks closer than a brother. He will never leave you or forsake you. He knows each tear you’ve cried. He is your ever-present help in times of trouble. He will bind any brokenness, and carry your burdens. His name is Jesus, and He knows your name too. Hold Him close to your heart, and He whispers in your ear, “keep running. I am your reward”.

I haven’t finished this race; I’m only eight years in. But I am still running. When hurdles pop up… and they always do… and when sin weighs me down, and it sometimes does, by God’s grace and strength I choose to keep running. Every time I have a chance to quit and choose to run instead, I grow stronger; we grow stronger, faster, better. There is great reward in being faithful.

I don’t know what kind of hurdles you will face, and maybe it seems overly simplistic for some scenarios. But ask anyone who’s finished and they will tell you it is worth it in the end. God won’t give up on your marriage, and He is willing to carry you across that finish line, if you need Him to. However you make it across, He is cheering for you every step.

Believing God for radical marriages that change the world. Praying for you this week.

You can read how death saved my marriage here.

I write about these things