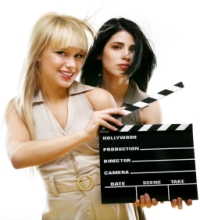 “All the world is a stage, and all the men and women are merely players” William Shakespeare

I was in a movie once. In fact I was in an Academy Award winning movie. I played the role of, “a girl”, not “the girl”, but “a girl”. It was a role I was born to play.

Okay so I was just an extra, and there is a slight chance the academy award had nothing to do with me… actually there is also a chance my scene didn’t make it into the movie … I never saw it. Anyway, for the purpose of bucket list #354 “Be in a movie”, check.

Being an extra is a little like crashing a wedding. You come all dressed up, but the party is not for you. I was so excited for my big role as “a girl”, until I got there and realized it wasn’t quite as special as I hoped it would be. I don’t know what I expected, but being crammed into a room with 50 other extras who were all treated like a huge headache that wouldn’t go away, was quite a surprise. The important people on a movie set are the actors and extras aren’t actors…not really…they are more like props. We use props to make something artificial seem sincere, but the prop can’t tell the story. It was awkward, and a little disappointing to realize the best part of being an extra is getting to say that you were in a movie. Yep, pretty lame claim to fame.

Have you ever felt like life is one giant movie but you definitely aren’t a main actor? Maybe you’ve even wished you could be cast as someone else. I know I have. In a world that loves us some celebrities, it’s easy to feel like my role is not that important. But God says I matter, that I belong, and I have the power to tell His story. With God there are no extras, my role is just as important as any other actor. In short, “I am kind of a big deal”, and Christian, so are you.

Here is what the Bible has to say about our role:

You are not a prop, you are a principal character. You can tell a story with your life about a God that saves. There are no extras. No one can play you better than you can.

Praying for you this week. That God will pour out His Spirit and make you bold so that many will hear His story through yours.

I write about these things